Fake It, Don’t Bake It With Sunless Tanning 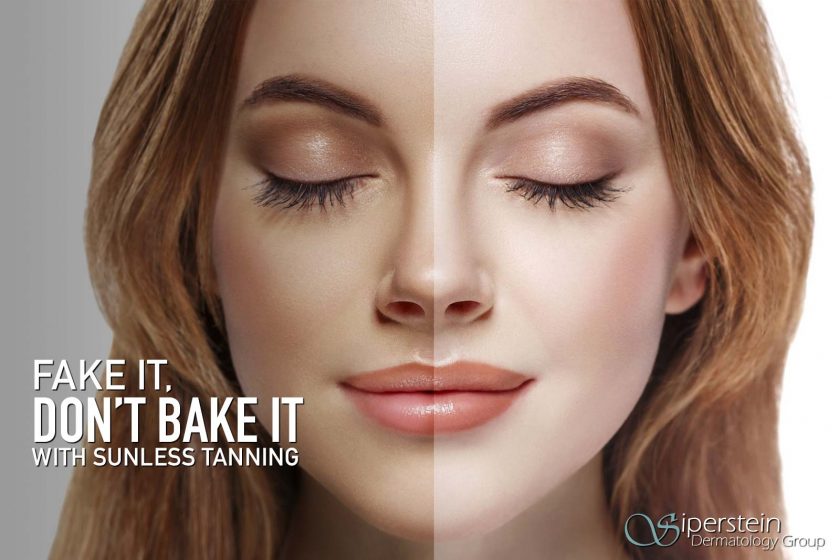 As the cold winter months finally come to a close, and we change out our jeans for shorts and summer dresses, many people may be embarrassed by their pasty, white legs. That pale winter hue often makes us flounder to get a sun kissed look before that first trip to the beach or big summer event. So, what do we do? We know that UV rays from the sun are harmful and can dramatically age the skin. Now there is a better alternative to the concentrated UV lights of a tanning bed. We give thanks to the invention of sunless tanning lotions!

While public awareness of the damaging effects of ultraviolet light from the sun and tanning beds has grown, the desire for tanned skin persists, especially in teens. The American cancer society reported one third of white American women aged 18-25 engaged in indoor tanning, so it is no surprise that the rate of melanoma is six times higher in young adults than it was 40 years ago. In 2009 the International Agency for research on cancer added UV radiation from tanning beds to its list of the most dangerous forms of cancer-causing radiation. Just one tanning session raises melanoma risk by 20%, and those who started tanning before the age of 35 increase their risk by 90%.

What Is A Tan?

Ultraviolet rays damage skin cells’ DNA, prompting the skin cells in the top layer of skin to produce more pigment to protect itself from further damage. Therefore, there is no such thing as a safe suntan from the sun, even if you are wearing sunscreen, as a real tan is a sign that DNA damage has already occurred.

What Is The Safe Alternate To A Tanning Bed?

The simple answer is a sunless tanner. Before you suffer flashbacks of Cheeto stains streaking your legs, we have some good news for you. Sunless tanners have made wonderful advancements since the 80s when they were notorious for producing unrealistic color, not to mention orange streaked palms.

What Is A Sunless Tan?

The color from most sunless tanners comes from the ingredient dihydroxyacetone (DHA), a simple carbohydrate, and is approved for use by the FDA. It is much safer than a tan from cancer causing tanning booths. Unlike UV light, DHA does not penetrate beyond the protective outermost layer of dead skin cells.

The only concern about self-tanners, comes from the sprays, and relates to the risk of inhalation and ingestion, which is not recommended. For those using spray tanning products, it is important to wear protective gear for the mouth, eyes, and nose to protect the mucous membranes.

DHA, which is simply a sugar molecule that bronzes the top layer of skin, can be found in all forms of self-tanners including creams, lotions, sprays, aerosols, and wipes. The browning effect occurs within a few hours and the effect is temporary, lasting 5-10 days as the skin naturally sloughs off. Antioxidants such as caffeic acid phenethyl ester (CAPE) may be added as well to lessen the orange yellow color to achieve a more natural tone. I personally use these products and recommend them to my patients as a safe alternative to traditional tanning. Self-tanners provide some minimal protection from the sun but should be used in conjunction with broad spectrum sunscreen.

For more information of sunless tanning and sun safety from the professionals at Siperstein Dermatology Group, give us a call at our Boca Raton office (561) 955-8885 or the Boynton Beach office (561) 364-7774.