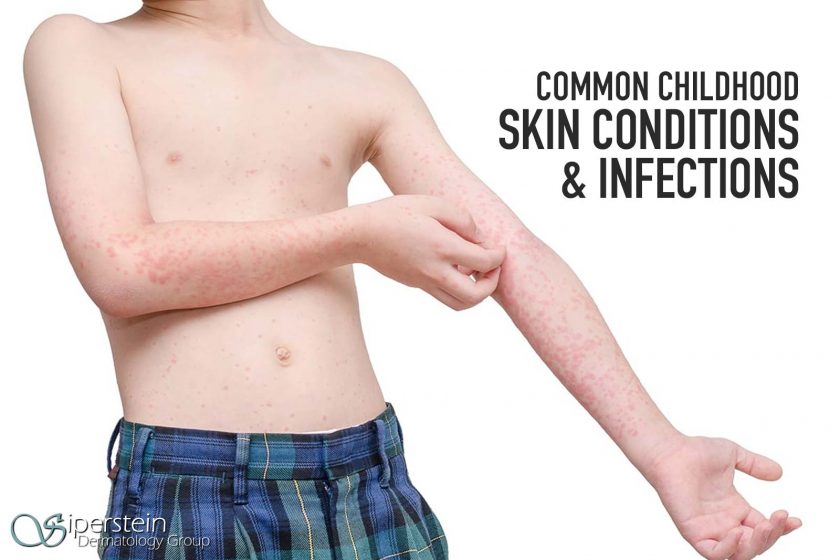 Children spend a lot of time around other children at daycare or school. They sit and play close to each other, share toys, and eat together. And let’s face it, kids are germ factories! This close contact with each other can make them more susceptible to common viral illnesses that can cause rashes and warts. While most of these viruses are not serious or life threatening, they are quite annoying for both children and parents. Learn about the most common viral skin conditions we see in the office, and what we can do to help your child.

The old stories blamed frogs for the appearance of warts, but they are actually caused by the human papillomavirus (HPV). Warts are contagious and spread easily through contact, such as hand shaking or walking barefoot.  You can also catch the wart through fomites, which means inaminate objects (toys, floors) that carry the virus from one person to another. The virus is spread when there is an opening or sore in the skin that allows the wart virus to penetrate the protective layer.  Both adults and children can get warts, but they are likely more common in children due to their immature immune systems. Warts can be stubborn and often resist treatment. Those on the soles of the feet, hands and around nails may need to be treated many times. Treatments vary depending on location. One or a combination of the following methods can be used:

Also known as ‘water warts’, molluscum contigiosum is a common childhood skin condition caused by a pox virus. Infection is passed on through direct contact or via objects that have come into contact with the lesions, for example shared bath towels. As this disease spreads so easily, it is extremely common among small children in daycare or school. It often flares in the same areas of the skin that are affected by eczema, as this skin tends to be scratched open, making it easier for the wart to penetrate. Molluscum contagiosum is usually treated the same way as warts, and may need multiple treatments. Unlike warts, molluscum can actually go away on its own if left untreated, but it may take years.  Often it is itchy and bothersome to the child, which is why we tend to treat it.

This disease usually occurs in children under the age of three and is caused by herpesvirus-6. As the name suggests, it is very common in infants. The first symptom is a high fever, followed by a widespread rash. Usually the fever subsides after 3 days. Sometimes the skin rash is followed by the appearance of red spots on the patient’s soft palate of the mouth.  This is usually a self-limited virus, treated with medications to reduce fever such as Tylenol or Motrin. However, due to the ability of the virus to produce high fevers, some kids can get febrile seizures. If this happens, the child should be taken to hospital.

Slapped cheek syndrome got its name from the red rash that breaks out on the cheeks and is caused by parvovirus B19. It can also be called fifth disease or erythema infectiosum. Sore throat, mild fever, stomach cramps, headache, fatigue and itching are some of the symptoms that may begin approximately a week after exposure to the virus. These last 2 to 3 days. Over the next 7 to 10 days, the symptoms will fade. The red ‘slapped cheeks’ will appear followed by a widespread rash. Diagnosis can be made a doctor. Symptoms will be treated to bring relief, such as Tylenol for fevers and steroid creams for itching.

The cause of pityriasis rosea has never been linked to a specific virus and is unknown. It has been possibly related to upper respiratory infections. Many viruses have been implicated, but none have been linked as the absolute cause of this disease, which can happen in both kids and adults.

The rash starts as a large round or oval patch, also known as the “herald patch”, that can sometimes be confused with a ringworm. The “herald patch” develops into symmetrically distributed pink, scaly patches, sometimes in a Christmas Tree pattern on the back.  It is sometimes itchy. The rash may last 6 to 8 weeks. A medical professional will be able to diagnose. Symptoms can be treated individually.

This childhood disease is usually caused by the coxsackie virus, though the enterovirus can be the cause in rare cases. The most contagious period is during the first week. Flat sores appear in the mouth, hands, and feet. The flat sores become blisters which can burst and cause pain. High fevers can occur over the following 24 to 48 hours. A medical professional can diagnose this illness. It is best to avoid any food that could further irritate the ulcers in the mouth during the course of this illness. It is treated symptomatically.

When your child comes home with a rash, spots or other symptoms on the skin, you don’t have to try figure it out or manage it alone. Contact the team of professionals at Siperstein Dermatology Group for advice and treatment.